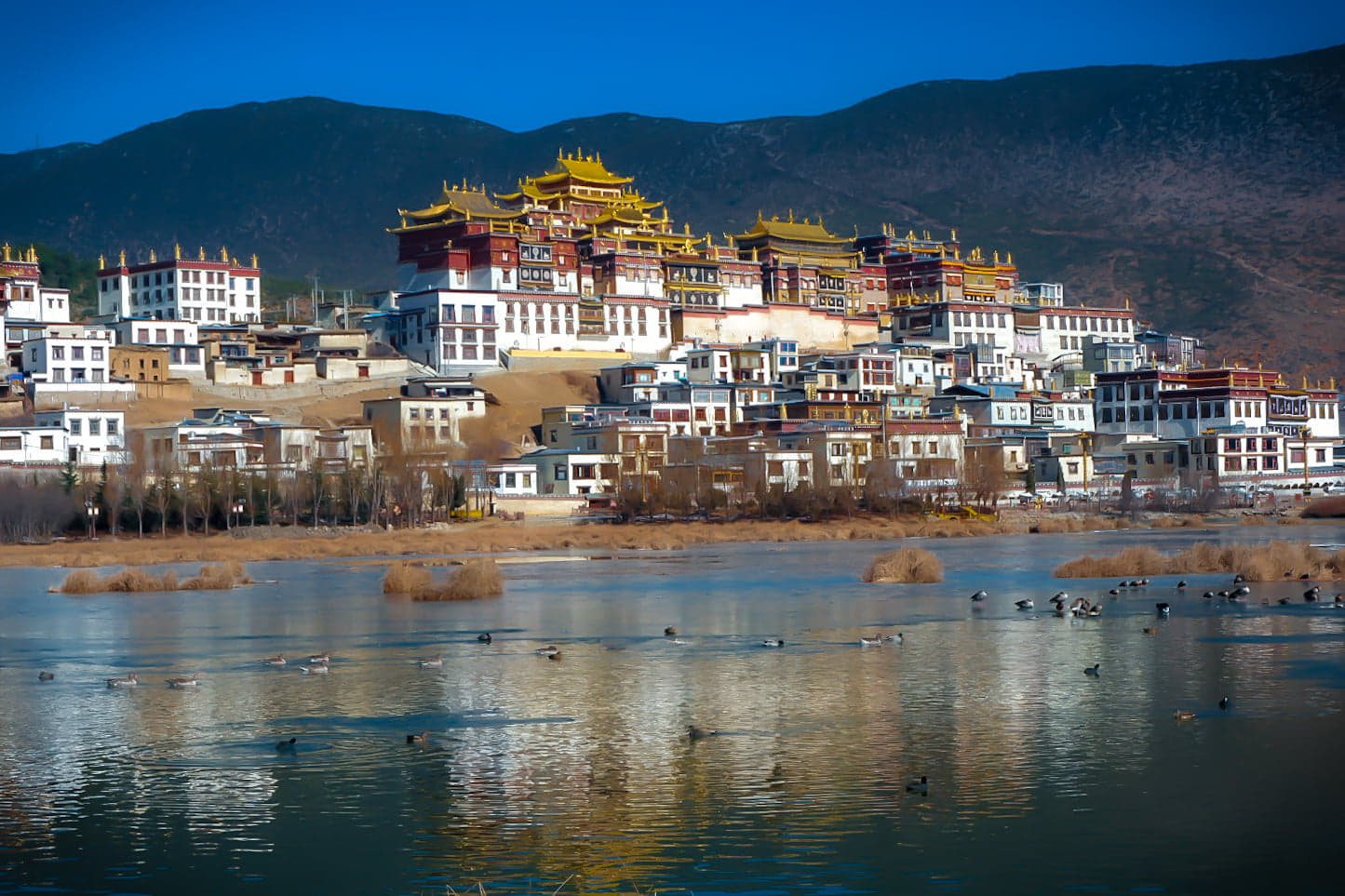 Many would often refer to Tibet at the “Roof of the World”. With an average elevation of 4,500 meters and a land area of 2.5 million square meters, the Tibetan plateau is the highest and largest in the world. To give you a perspective, Mt. Apo’s peak (tallest mountain in the Philippines) is only at 2,954 meters , and the land area is about 8 times the size of the Philippines. It is also home to the 7 out of the 10 tallest mountains in the world including Mt. Everest.

Tibet is also known as the “Third Pole” with having the 3rd most glaciers aside from Antarctica and the North Pole. These glaciers are also the source of some of Asia most important rivers including China’s Yellow river, Myanmar’s Irrawaddy river, India’s Ganga river, and the famous Mekong Delta river. The geography is mesmerizing and humbling to say the least. Being among these giant mountains, massive glaciers, and fjord-like valleys, made me realize how vast the world is and how small we really are.

Equally as interesting as Tibet’s natural attractions, are the Tibetans and their culture. Having been secluded from the rest of the world and from time, they are one of the most interesting, reserved, mysterious, and sacred people you will ever meet. Their main religion is Tibetan Buddhism and their spiritual leader is the Dalai Lama.

Having said that, there is a very dark side to Tibet. In 1950, China took over by force and many Tibetans have been living under their diplomatic rule up to this day. In 1959, the people formed an uprising to overthrow China but they were brutally crushed and many were killed. For his own safety, this forced the Dalai Lama to flee to India and lead in exile. Today, Tibet is now the most oppressed and closed societies in the world. Though China, insists that Tibetans are happy and at piece, they still would not allow media personnel, diplomats, and journalists to enter Tibet for they might see the on-going abuse by the Chinese. For tourists, one must secure a special permit to enter Tibet. There only a few places that would not require this permit and one of them is the lost paradise, Shangri-La.

Shangri-La is known as one of the top hotel chains with beautiful world-class facilities all around the world. However, not many know that this specific hotel got the inspiration from the real place. The book the Lost Horizon, author James Hilton describes Shangri-La as earthly paradise, particularly a mythical Himalayan utopia – a permanently happy land, cut off from the world and time. This description made me decide to see Shangri-La for myself and also having been to Nepal just 8 months before this trip. The clouded mystery and the rich culture made me back my bags and head to Tibet.

Click here to learn about my spiritual journey to Kathmandu and the Himalayas.

Travel Restrictions and What You Need to Know

VISAS and ENTRY PERMIT: Shangri-La is located in Yunnan prefecture on the west side of the Tibet Autonomous region. As of December 2019, you do not need to secure a Tibet permit to enter Shangri-La and you would only need a Chinese visa depending on what passport you have. They also allow solo independent travelers to enter but this might change in the near future.

TRAVELLING TO SHANGRI-LA: The most convenient way to go to Shangri-La is to book a flight to Diqing Airport (Shangri-La Airport) as this would take you straight to the city. The difficult challenge is looking for the right flights to Diqing. Since this is not a common destination for the average tourist, I had a hard time getting flights from Manila, Philippines. It took me a 3 flights and a total of 19 hours travel time including airport layovers just to get to Diqing. Not to mention that the flights were not cheap! Other options would be to fly to Chengdu, Sichuan, or Kunming and take a 12-14 hour bus to Shangri-La.

ALTITUDE: With an altitude of 3,200m, Shangri-La is considered a high altitude location and one of the biggest threats for tourists is Acute Mountain Sickness (AMS) or commonly known as altitude sickness. Upon arriving, you will notice that air is much thinner and it is highly recommended to acclimatize for a day before going on the tours. Do not attempt any physical activity such as hiking or excessive walking. You may also take altitude sickness pills to prevent getting sick. My doctor prescribed me to take Zolmide once a day for the duration of the trip. Best to consult your doctor to get your own prescription. Signs of altitude sickness such as headache, nausea, vomiting, dizziness, chest tightness, and difficulty of breathing. If you experience any of these, proceed to the hospital immediate medication.

WEATHER: Just like majority of China, there are 4 seasons and locals say that the best time to visit would be during fall around late September to November where temperature is around 15C . I visited during the winter and temperatures dropped to as much as -12C. I would recommend to apply sun block too avoid sun burns since Tibet gets high amounts of UV rays being high up in the mountains.

LANGUAGE AND COMMUNICATION: The main language locals use is Mandarin and Lhasa Tibetan language. They speak very little to no English making it very hard to communicate. If you do not know how to speak their native language, then I would suggest to use apps such as Google translate to communicate. For internet connection, usually hotels, home stays, and some restaurants would offer free WiFi. For mobile data, I bought a China Unicom sim from the Kunming airport.

PEOPLE AND RELIGION: 85% of locals are Tibetan and 15% are Chinese. One thing very interesting about Tibetans is they have this enigmatic and solemn charm with them. They are devout Buddhists and their actions reflect how they are true to their religion. You often pilgrims perform  the kora, circumnavigating stupas and temples, turning large prayer wheels as they go.

TRANSPORTATION: There are 3 means of transportation going to the attractions. The first option is via Didi (China’s version of Uber / Grab). I was surprised to find out that Didi was present in Tibet. I did not experience booking a Didi myself, but my tour guide helped book one for me going to the airport. Next option is via local taxi. I rode a taxi quite a few times and noticed that the drivers are not using the taxi meter. They always say a fixed price which you need to bargain. The last option is the city and provincial buses. There are a few buses going around the city which would charge you 7-10 RMB and the provincial buses which will take you to other provinces such as Lhasa, Lijiang, Chengdu, and many more.

ACCOMMODATION: Shangri-La is a small city and there are only to areas to choose from.
Downtown – where you can find hotels and restaurants. This is the developed / modern side
Dukezong Ancient Town – the most preserved Tibetan town in all of China. Get a chance to stay with a local and experience authentic Tibetan culture.

Of course I chose to stay in Dukezong and stayed with a Tibetan family. This is the first time I experienced staying in the house of local in another country. The owner English name is “Tiger” and he let me stay in one of the rooms for PHP 600 per night. If you wish to experience the same you may contact Tiger through WeChat here (WeChat ID: xiaohu290609)

OVERALL EXPERIENCE: This was not a spur of the moment trip as Tibet has always been one of the top places wanted to visit. As a kid, I could still remember reading the Tintin in Tibet comic book and how I wished I could have an adventure similar to him. Many years later, having step foot in Tibet, I felt that my mission was complete. Having experienced seeing the Songzanlin Monastery, traversing the Himalayas (once again), fighting altitude sickness, performing rituals in the stupas, and to top if off, being adopted by a local Tibetan family, made this trip the best!

PLACES TO VISIT: My time in Shangri-La was very short. With only 4 days to spare minus 1 day to acclimatize, I only have a handful of places to can I go to. However, I made sure to visit the must-see attractions. Here we go!

Songzanlin Monastery
A Tibetan Buddhist monastery with an altitude of 3,380m. It belongs to the Yellow Hat sect of the Gelukpa order of the Dalai Lama and is currently holds around 700 monks. The absolute highlight of my trip

Dukezong Ancient Town
This was a key stop in the old Tea-Horse road going to Lhasa. Ancient dwellings, prayer flags, and pagodas can be seen all around this area. The current structures were preserved all the way back when it was founded hundreds of years ago.

Guishan Park
Located at the end of the Dukezong Ancient Town is Guishan park. It is located on top of a small hill overlooking the snow capped mountains beyond the horizon.

Guishan Temple
Located at the very top of Guishan park is the Guishan temple. Its design is like a mini Songzanlin monastery.

Largest Prayer Wheel
Located just a few meters away from the Guishan temple. It would take around 10 people to spin this prayer wheel.

The next 5 attractions were part of the Balagezong day tour from Dukezong Ancient town. Going to these places on DIY is strictly prohibited.

Gezong Holy Mountain
At an altitude of 5,545m, this is the highest peak in the region.

Shangri-La Grand Canyon
One of the most majestic view points I have ever seen. Its hard to imagine that the river below is still at an altitude of 3,000m. We are this high in Tibet.

Balagezong Gorge
One of a kind experience riding a boat in a glacial gorge.

Bala Village
This abandoned village used to be home to the Bala tribe. It is located high the in mountains and has a great view of the snow capped peaks.

STAY TUNED FOR OUR UPCOMING BLOGS!

JOIN US AS WE VENTURE OUT ON NEW LOCAL AND INTERNATIONAL DESTINATIONS!

This site uses Akismet to reduce spam. Learn how your comment data is processed.