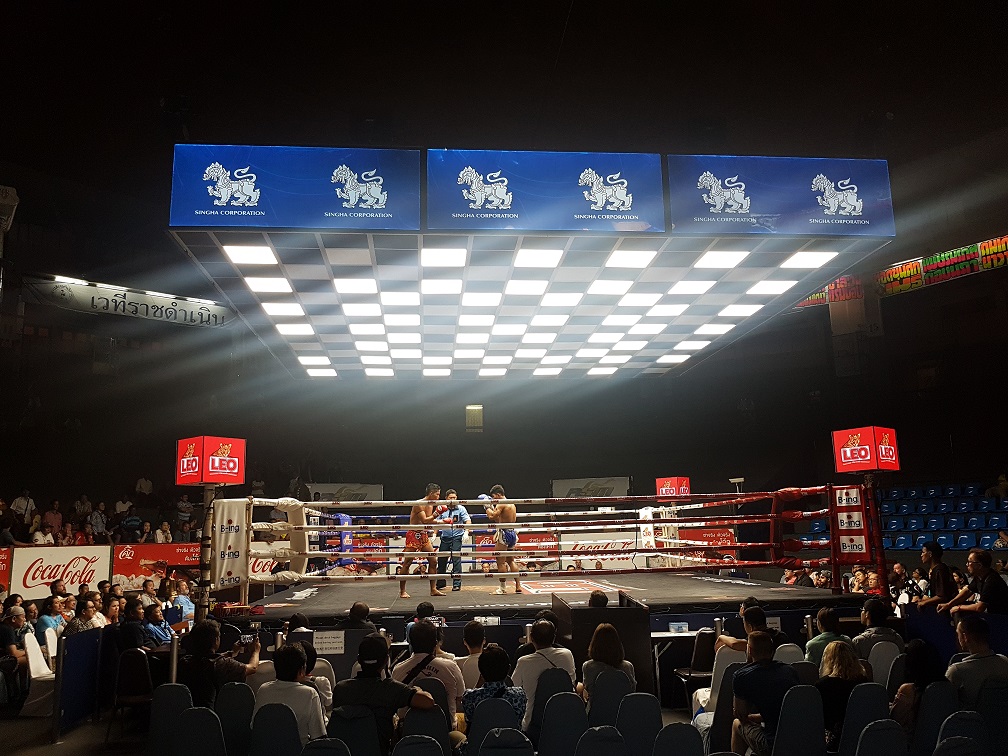 Muay Thai is Thailand’s national sport. It is also known as “Thai Boxing” or the “Art of 8 limbs”. It is a combat sport fought in side a boxing ring where fighters can use their fists, elbows, knees, shin, and feet to strike their opponent. The art originated during the 17 century during the peak of the Burmese-Siamese war. It was used as practical self defense and eventually became a sport where it was first fought with spectators for entertainment. It evolved to being part of local celebrations and festivals held at local temples.

Today, it is a well known sport being practiced not just in Thailand but all around the world.
My interest in Muay Thai started when I was watching the UFC on TV during my high school years until today. So when I got the chance to visit Thailand, I made sure to watch at a live fight from the country where it originated from.

There are many stadiums in Bangkok where you can watch Muay Thai. At times, these fights are even being hosted in open spaces where people can watch for free! Since it will be my first time to watch a live fight, I want to make my experience memorable and watch the best fighters. Upon weeks of research, I discovered the best stadium to watch. The Mecca of Muay Thai, the Rajadamnern Stadium

The Rajadamnern Stadium
The Rajadamnern Stadium is one of the two most important arenas in Thailand. It was the first stadium and was built in 1945. What makes this area important and special is that only the best and fiercest Muay Thai fighters get to compete here. The legendary fighters that have already competed here would be Saenchai, Buakaw, Singdam, Yodsanklai, and John Wayne Parr to name a few. This would make your experience truly the best and world class.

Rajadamnern hosts fights every Monday, Wednesday, Thursday, and Sundays with the marquee fights usually scheduled on a weekday. There are a total of 8-9 fights per show with the main event being the last fight. The fights usually start around 6:30PM and would end around 11:00PM. This gives you around 4 hours of action packed, adrenaline pumping, on the edge of your seats fights you will only experience in Thailand.

One unique experience not to miss is the betting that happens all around the stadium which is totally legal in Thailand. The betting odds are the most unique you will ever find. Each bookie has his / her own betting odds set and it even changes as the fight goes on. The gamblers just usually shout to the bookie to make his / her bets. At the end of each fight, the gambler gets the money right away. The betting although can get quite rowdy at times, adds to the energy of the crowd.

Another thing worth mentioning is the Wai Khru. It is a traditional dance performed by fighters before competing in bouts. Though this dance the fighters pay respect to their teacher, parents, ancestors, and even to the Buddha, Rama and Sanga of the monks. Local spectators can even determine who will win by just watching the Wai Khru.

Ticket Prices:
2000 Bhat – ring side seats (closest to the ring. near the action)
1800 Bhat – club class tickets. (similar to second class seats but the chairs are cushioned)
1500 Bhat – second class seats (this offers a better view since the seats are elevated)
Don’t even bother getting the third class seats since your view will be blocked by a fence.

My recommendation is to get the second class seats to get a good view. You can also purchase tickets at the stadium ticket booth or you can purchase in advance through their official website https://rajadamnern.com/tickets/

This site uses Akismet to reduce spam. Learn how your comment data is processed.